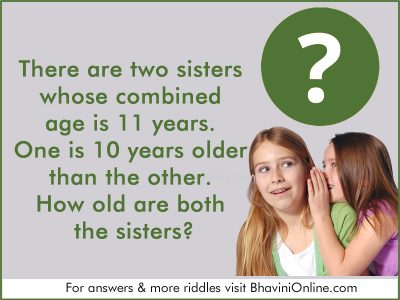 Read carefully before posting your answer to this brain teaser. There are two sisters whose combined age is 11 years. One is 10 years older than the other. How old are both the sisters? So were you able to solve the riddle? Leave your answers in the comment section below. You can check if your

END_OF_DOCUMENT_TOKEN_TO_BE_REPLACED Read the brain teaser and then answer the question. There were seven brothers in a family. They were all born two years apart. The youngest brother is 7 years old. How old is his oldest brother? So were you able to solve the riddle? Leave your answers in the comment section below. You can check

END_OF_DOCUMENT_TOKEN_TO_BE_REPLACED 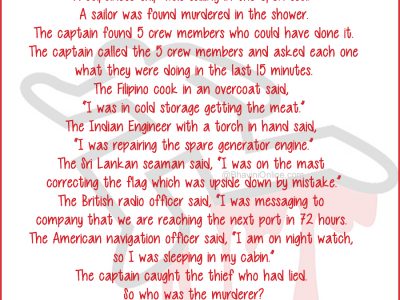 Wear your detective hats and find who killed the sailor. Apparently, 98% people failed to solve this murder mystery riddle. A Japanese ship was sailing in the open sea. A sailor was found murdered in the shower. After some analysis the captain found 5 crew members who could have done it. The captain called the